I've had to fight for time in the studio lately.

The good news is I'm getting there and I'm making drawings. I have a series of colored squares I have been working on. They can stand alone, work in tandem, or be arranged in groups in multiples of two. These are in a subset series of measurement drawings that are long and short.

This is what was on the wall last wednesday. I've drawn on a third square but I'm not sure that it is finished. I have a feeling that it is done but waiting is good for clarity. I have a studio day on Saturday so I'll be able to reassess. 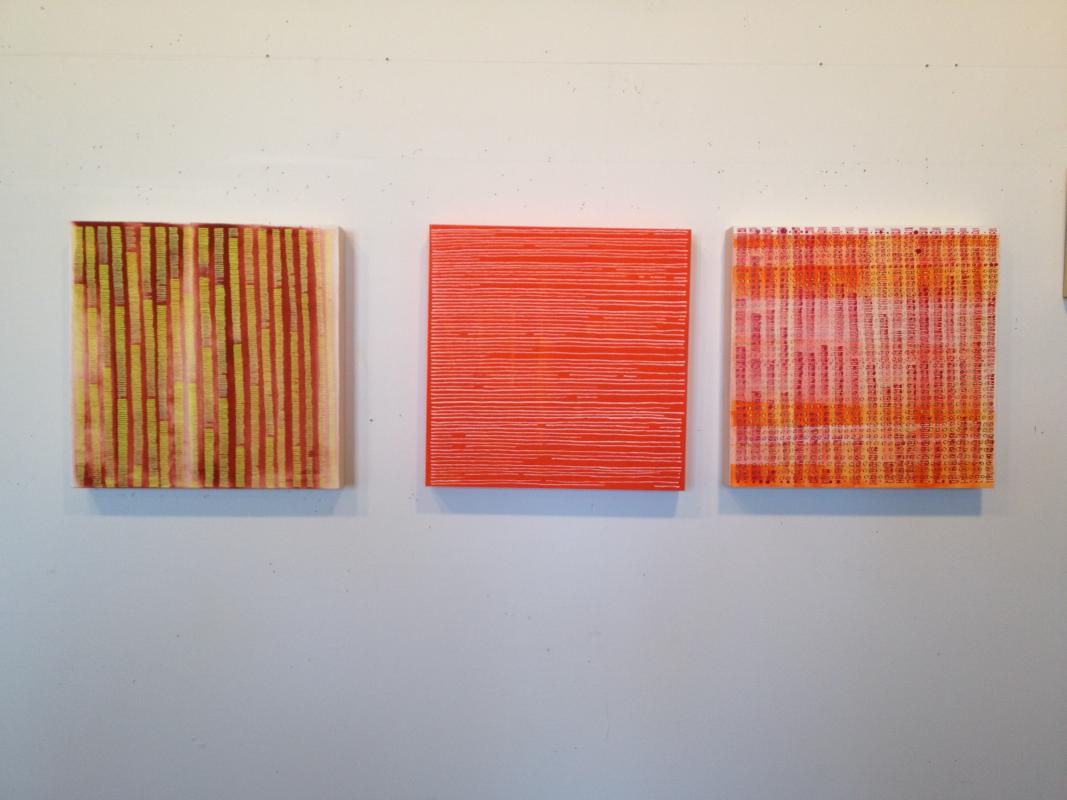 The short lines have begun.

In this group of drawings the short lines are made on watercolor paper mounted to a board. This is the first in the pair. The green feels like spring. Looking forward to what transpires as the marks continue.

Already the drawing appears differently based on the angle from which it is viewed.

The earth is so dark right now. Still moist from our most recent melted snow. Applying my dark earth color awakened the smell of the forest floor to me. Dark, covered with pine needles compressed by my boots.

This image shows the application of the dark earth. 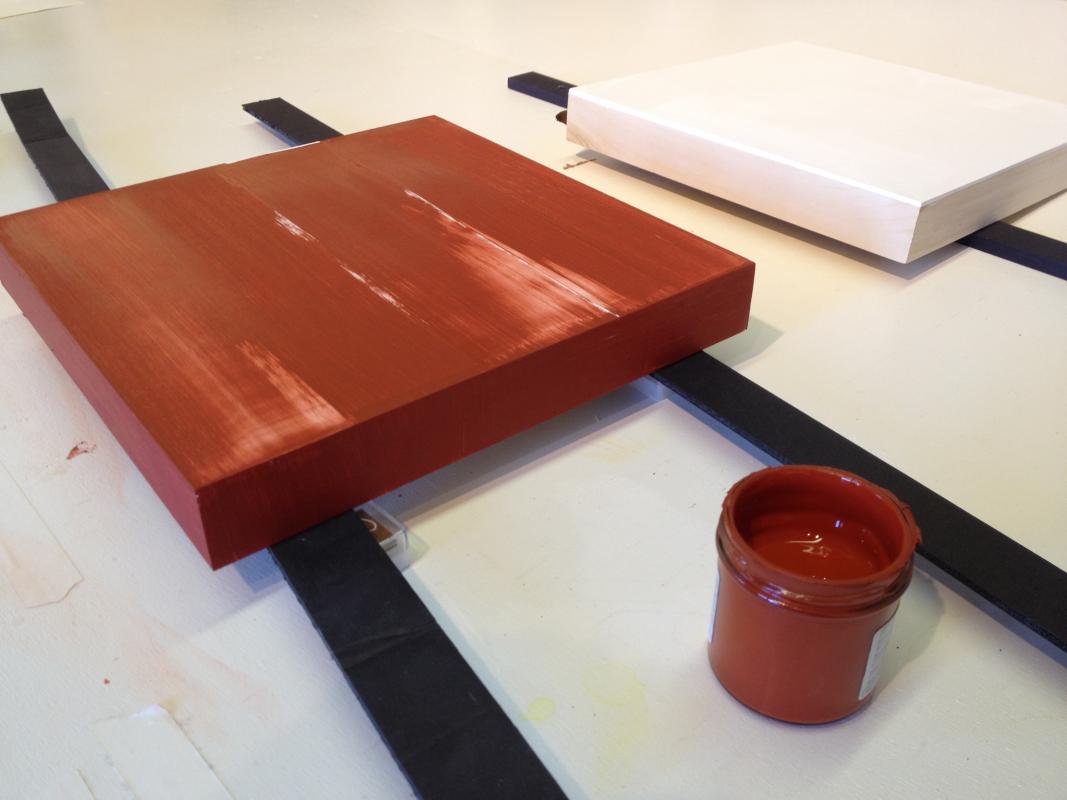 One of the essential parts of making art is getting ready to make art. The rituals of opening new materials, sanding surfaces, applying sealers and grounds are all necessary to get in the art making state of mind.

I'm prepping two new panels for drawings. As with my previous drawings in this series one drawing will be made directly on the wood surface and the other will be made on watercolor paper mounted to the panel surface. To protect the paper from the wood surface it needs a gesso layer and a protective bonding agent. 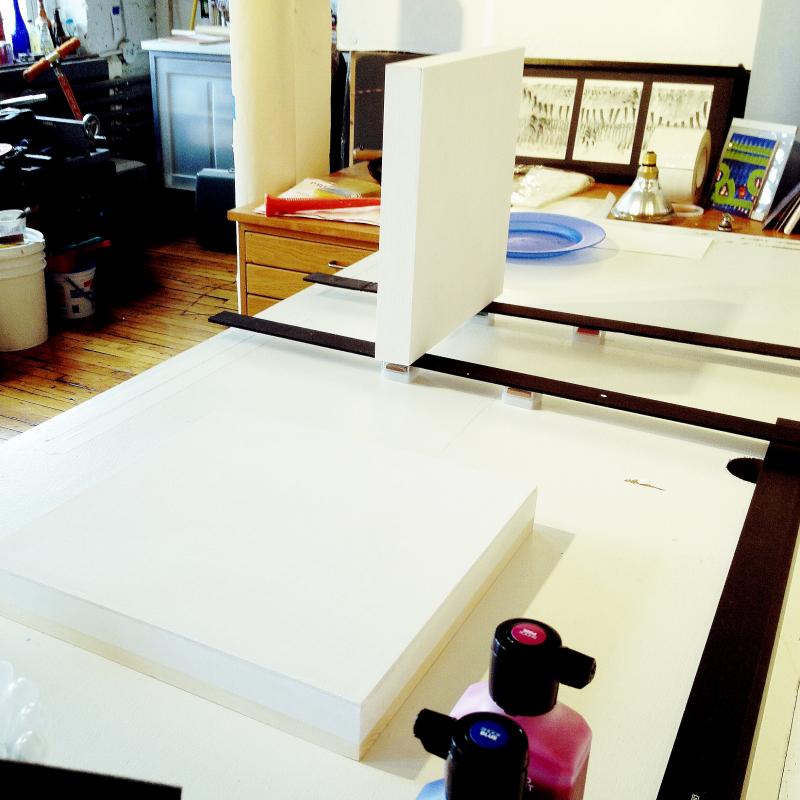 Two drawings. It took me much longer than usual to make this pair. 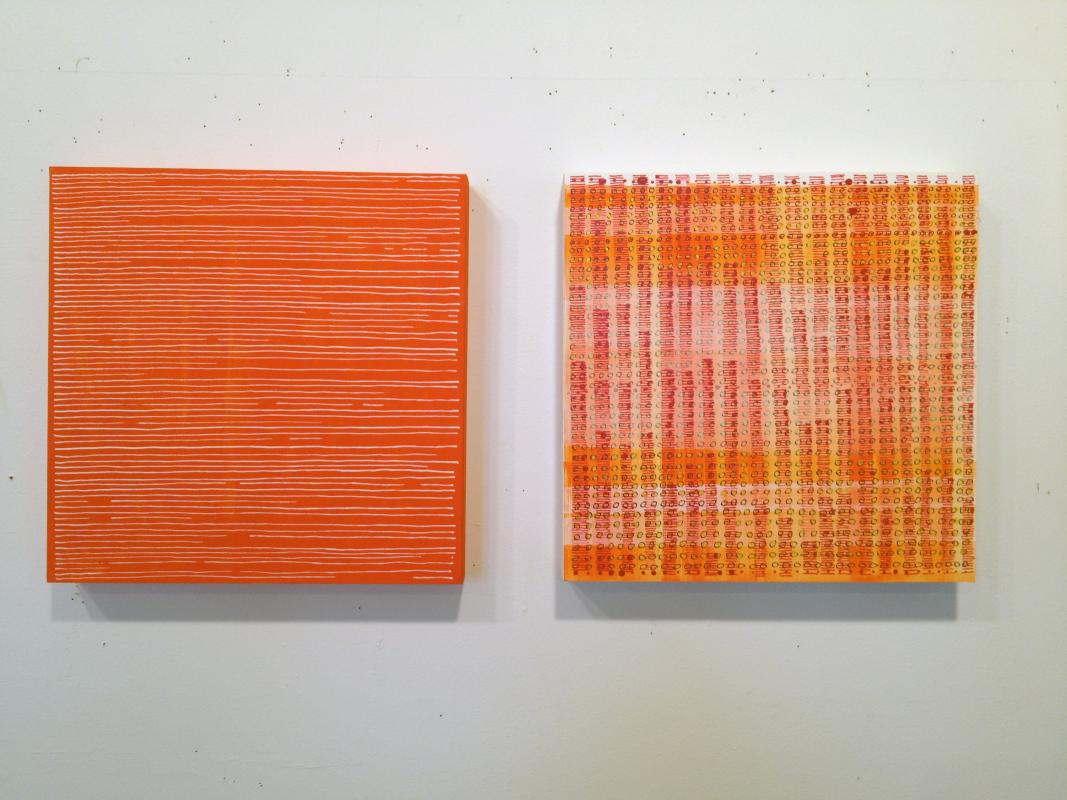 Yesterday was the first full day in my studio in a while. Freezing cold temperatures and the job had kept me away. Still it didn't take long to choose a challenge for the day.

I have been working on two orange panels for several months. What I wanted to do with them has made itself known in waves of clarity and cloudiness. I began clearly enough with dense and tonal backgrounds of orange. I almost wanted to leave them in their first state. I wasn't brave enough. I would come to the conclusion later they weren't really finished. 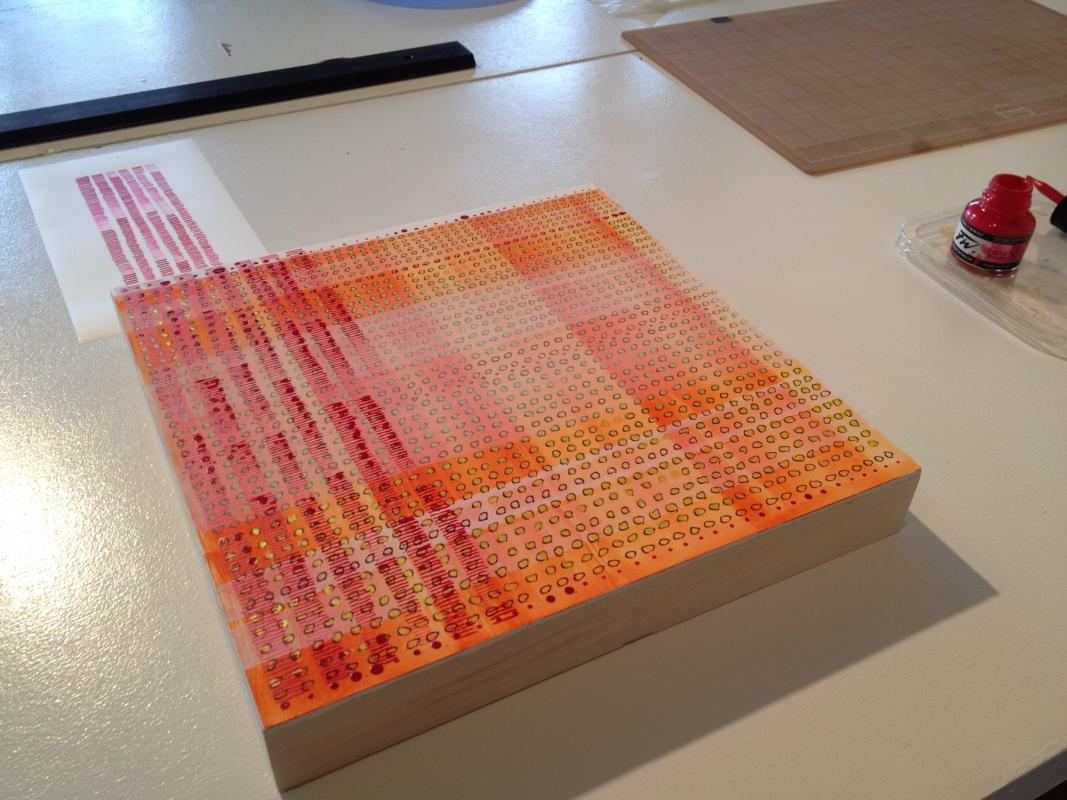 Trying to get something started.

I cut some sheets of Yupo to size. Working on seeing what happens when I make a series of about 40 drawings and arrange them in a grid. These are the first two in the series.

I'm about to work on two new pieces within the same framework. I never know what this ink will do. I haven't done any of these monochrome measurement drawings with magenta before. So much is new in drawing and experience. Off to make some more. 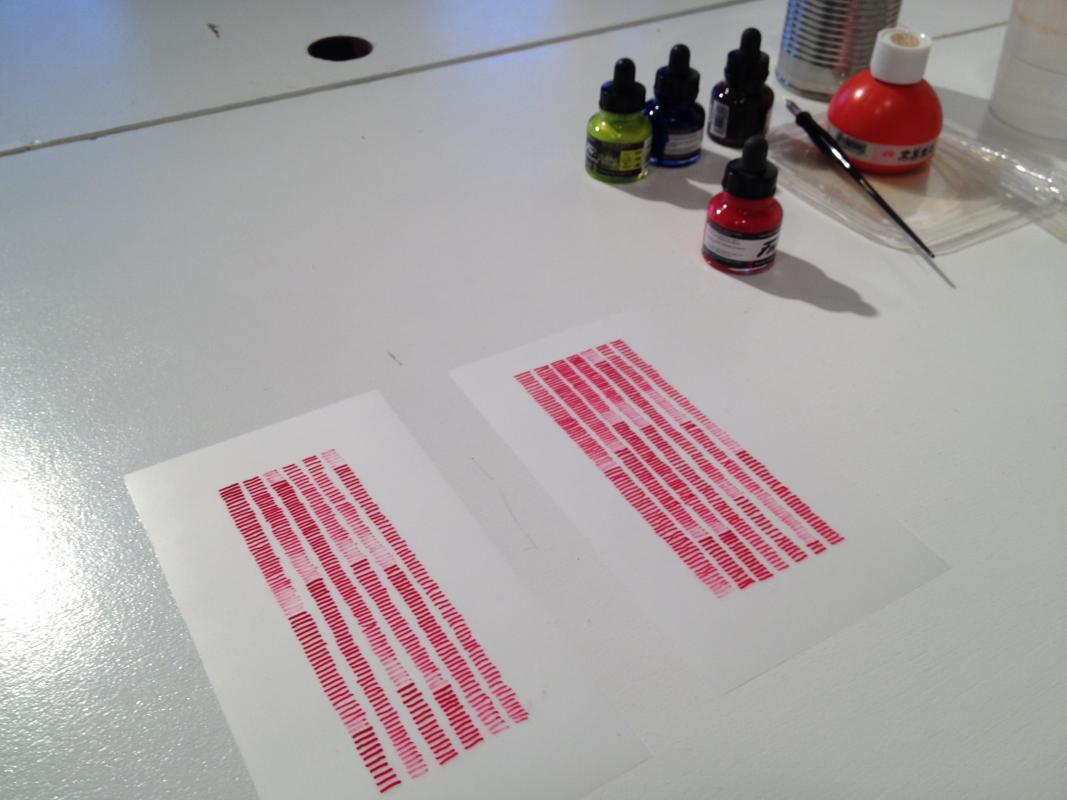 Finally back in the studio today.

When I return to the studio after having been away for a number of days in a row my day goes through several creative stages. Gathering supplies, preparing surfaces and then making the first marks of the day.

Today's first marks were an experiment. I used sumi ink and some new plastic droppers.

I'm not sure what will happen next but it was a good start to the day.

Most recent work. Expanding the measurements series with horizontal lines. These lines require super concentration. Dip pens need to positioned just right to drag across the substrate. The lines again are drawin with one dip until they run out and then are filled again. When the ink runs out I return to begin from the left again. Open spaces occur randomly, creating a rest in the measurement.

I always draw or brush pigments for my backgrounds.so the have tonal differences, sometimes textures, and almost always — voids.

These are new drawings the first that I have made in the new year. I had to start somewhere and something said: Make a purple drawing, very purple. 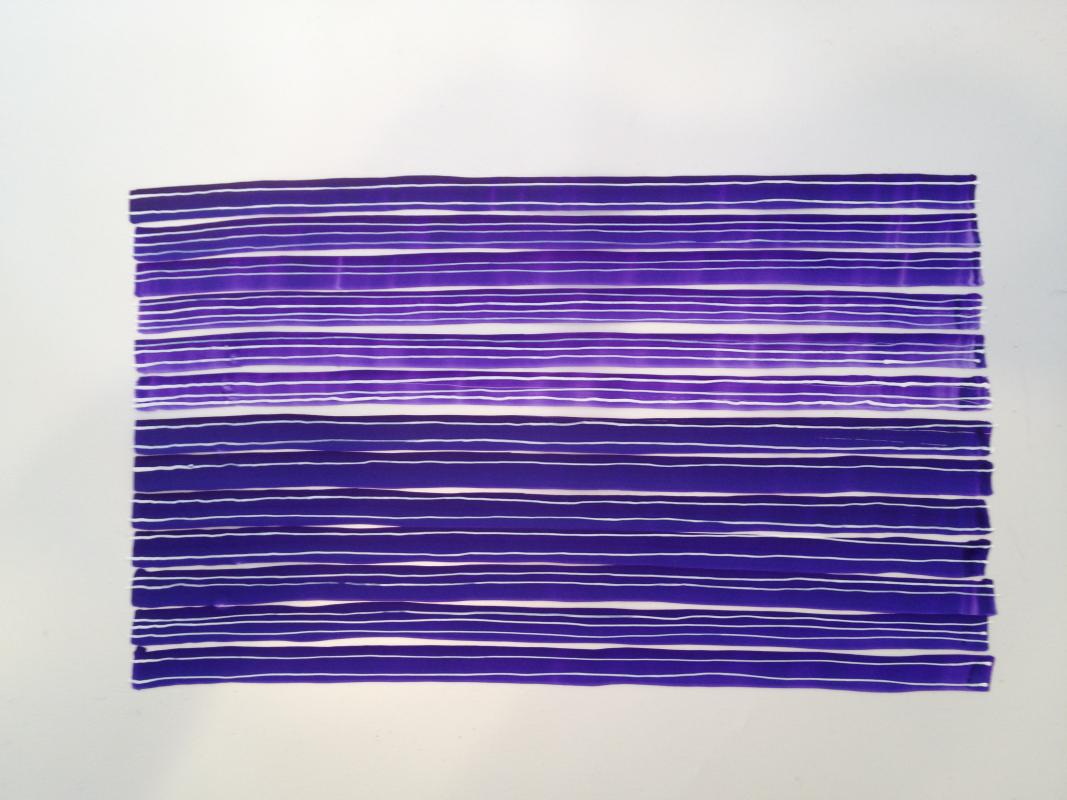